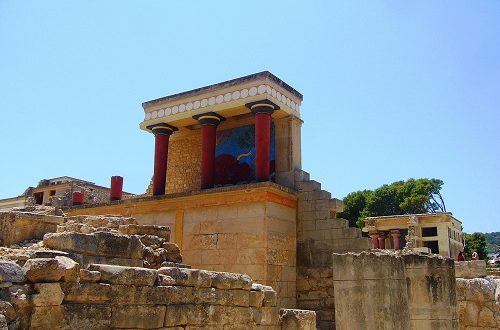 Crete is the largest of the Greek islands, it has its own distinct character and is a deservedly popular holiday resort.

The island is south of the Greek mainland in the Eastern Mediterranean. It is over 150 miles wide but less than 40 miles North to South though mostly less. It is home to a population of around 600,000 boosted by over two million tourists each year. In comparison to most other Greek islands, unemployment is lower and prosperity higher. It has an important agricultural economy although tourism is where most growth has been. A mountain range crosses the island west to east, rising to over 8000 feet.

There is evidence of human occupation around 130,000 years ago, likely much earlier still. Crete was home to ancient civilisations. The Minoans are considered to be one of the first advanced civilisations living here around 2000 BC. The palace of Knossos, partly restored is extensive and a popular excursion for tourists. Many invaders have arrived over the centuries from the Greek mainland, Rome and other places, most recently, Nazi Germany; all leaving their marks.

Now it is one of the principal Greek administrative units with its capital at Heraklion near the centre of the island.

Flights from the UK take about four hours, there are airports at Chania in the west and at Heraklion. Most leading tour and many independent operators offer holidays. There is a wide choice of places to stay, from villas to luxury resort hotels. Rethymno and the surrounding area is highly popular. English is widely spoken and the currency is the Euro.

The Greeks and Cretans are rightly proud of their cuisine which is well worth seeking out. Crete has successfully retained it’s culture, and despite its popularity been able to resist becoming too “tourist tacky.” Visitors often return, again and again.