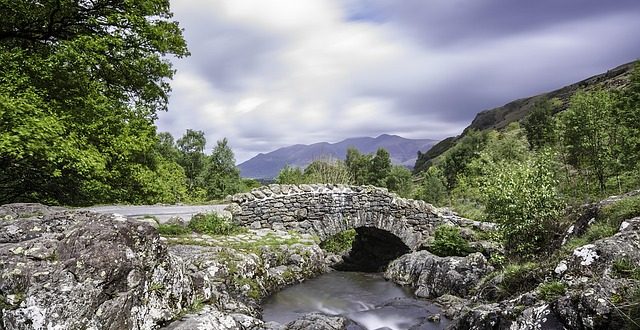 If mountains, lakes, pretty villages and walking are what you like, you could visit Switzerland, on the other hand, the English Lake District is a bit closer and cheaper.

The Lake District is located in the North-West of England in the county of Cumbria. Easily accessible from the M6 motorway. Windermere has a rail service. A bus service links Keswick with Penrith station on the main line from London to Glasgow.

In 1951, it was designated a National Park, officially recognising the area’s natural beauty. It is the most visited UK national Park with over 16 million visitors a year. Don’t be put off, there is plenty of space away from the tourist honeypots. England’s highest peak; Scafell Pike at 3,209 feet, Windermere our largest lake, and the highest rainfall are here.

The main tourist centres are;

Beatrix Potter was born in London but fell in love with the Lake District whilst on holiday as a child. She found fame and made a small fortune from Peter Rabbit and other children books and their lucrative associated merchandising.

What she did with her wealth is less known about. She was a keen hill farmer and played a key role in preserving the areas indigenous Herdwick sheep breed. She set about buying up farms and land to preserve them which on her death, she left her extensive Lake District holdings to the National Trust.

Alfred Wainwright fell in love with the Lake District at the age of 23. To be closer, he took a job in Kendal where he spent his spare time exploring and documenting the fells. By the way, in Lakeland, mountains are known as fells.

The Pictorial Guide to the Lakeland Fells is a series of 7 books detailing 214 fells. They were a labour of love for Wainwright, every word is handwritten and every image, hand drawn. Not surprisingly, the series took 13 years to complete. First editions dating from 1955 are now highly collectable, due to their endearing popularity they have been carefully updated and continue in print. The Wainwright Society keeps a register of climbers who have reached the peak of all 214 “Wainwrights.”

Ironically, unable to interest a publisher, he self-funded the first book.

Get out of the car and get walking to appreciate what is on offer.

There are walks to suit all levels, from gentle rambles lasting a few hours up to the accent of our highest peak, Scafell Pike. Bookshops and Newsagents have many guides including updated versions of Wainwrights. For something not too challenging, I suggest you take the water bus from Keswick to Grange, then transcend the gentle Catbells Fell on your way back to Keswick.

As well as owning much of the land, the National Trust own several properties including where Wordsworth was born in Cockermouth, and Beatrix Potter’s Hill House. Pencil making dates back to 1830 in Keswick as a result of local graphite deposits. Pencil making continues and there is a unique museum. Jennings is a classic regional brewery with over 190 years of history offering regular tours.

Of the many gardens to visit, Levens Hall near Kendal is probably the most famous, here you can find a three hundred year old garden famous for it’s magnificent Topiary, the finest example in the country.
Tourist Office

Previous Walt Disney World Florida
Next The National Trust – Are you a member?