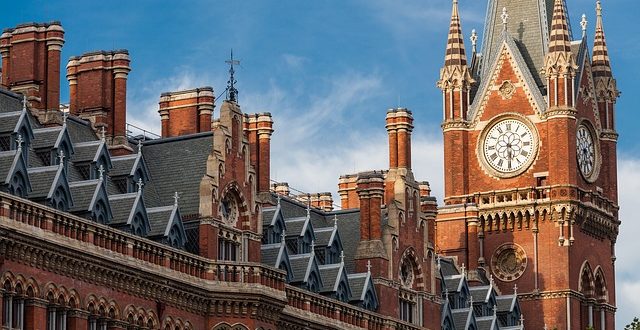 Britain’s railways were built by separate, often competing companies, they were also banned by the city authorities from entering the city boundaries. The result is that London’s Railway Stations form a circle around the city’s periphery unlike New York with it’s Grand Central Station. Today, transferring between stations is hard enough, but before the Circle Line and the rest of the Tube network, it was harder still. Unlike most British cities, London’s railways escaped most of the Beeching closures, only Broad Street and Holborn Viaduct have disappeared.

Here is our quick summary of London’s Railway Stations serving places north of the River Thames in a clockwise order. (A future article will look at the complex web of lines and stations serving the south).

Built by the Great West Railway and like the railway designed by Isambard Kingdom Brunel. The GWR did things differently, when built the lines were 7 feet apart rather than the 4 feet eight and a half inches, we use today. It is a grand building with a statue of IKB. When built it was well outside the city so the GWR welcomed the Metropolitan Line, which then allowed it’s trains to use it to reach Farringdon in the city. Now there are 14 main line platforms handling about 36 million passengers. Routes cover, the West of London, the Thames Valley, the Cotswolds, the West Country and Wales.

Marylebone is the newest of London’s Railway Stations, built by the Great Central Railway in the early 1900’s. Despite being built to continental standards and designed for high speeds, it never succeeded in competing with the Midland Line that it largely duplicated. Marylebone was designed with expansion in mind, but it was only in the 2000’s that the four platforms were increased to six.

Once threatened with closure, Marylebone is now a small but thriving station. It handles around 16 million passengers serving the Chilterns, the West Midlands and now Oxford, providing alternative routes. Chiltern Railways has been one of the most successful privatised railway operators. Only the Bakerloo underground line serves it, but Baker Street is only five minutes walk away.

Built as the gateway to the North, the originally station was a grand statement. Entrance was through a Doric arch standing about 70 feet high. Sadly 1960’s planners had no regard to history (and the fact the grand structure survived Nazi bombing). The arch and station were flattened and replaced by what is London’s ugliest main line station by far. Fortunately salvation may be near, as HS2 will require major rebuilding of this 1960’s monstrosity. The 18 platforms serve about 40 million passengers travelling to the major cities of Birmingham, Liverpool, Manchester and Glasgow.

If Victorian company politics hadn’t got in the way of common sense, the station would never have been built. Having failed to reach a working agreement with the Great Northern Railway, The Midland Railway had to build their own route to London. Not being a company to do things on the cheap, they built what many rate as London’s greatest station. When built the arched train shed was the widest in the world, and George Gilbert Scott’s Midland Hotel is a true cathedral of the railway building era.

Now the home of Eurostar, the once run down station has been sympathetically restored and extended. It seems unimaginable now, that it once faced the same fate as old Euston. Fortunately it was saved, helped a lot by John Betjeman the former Poet Laureate of whom there is now a statue on the concourse.

It’s now used by over 30 million passengers. As well as Eurostar, there are extensive commuter services and the remaining Midland Railway routes to the East Midlands and Sheffield.

Of London’s Railway Stations, Kings Cross is arguably the most famous, our most famous named train, the Flying Scotsman traditionally departed at 10:00 am and more recently, it’s the starting point for Hogwarts Express.

Despite it’s plain modernish exterior, the station was built before neighbouring Gothic styled St Pancras. For many years under British Rail control it suffered from overcrowding, probably the worst catering on the network and a general air of neglect. Now it boasts a new stunning concourse with leading shops and restaurants. The old derelict former railway lands beyond are being redeveloped.

It is used by over 30 million passengers, serving Peterborough, Leeds, Bradford, York, Newcastle, Edinburgh and Aberdeen as well as commuter services.

It may surprise you, but Liverpool Street serving 65 million passengers a year is well ahead on this list of London’s Railway Stations. It rates third in the country behind Waterloo and Victoria. To the east of the city, it handles mainly commuter traffic and longer distance services to East Anglia as well as the Stansted Express. It has 18 main line platforms and good tube connections.

The building has been updated whilst retaining historical features. Broad Street, once a thriving terminus serving commuters was located next door, all trace has gone, but the route to the station has been largely reopened as part of the extended London Overground.

Unless you are a Monopoly player or a resident of East London or South Essex, you may not of heard of the last station on our list. Despite it’s modest route network it handles around 18 million commuters each year. Now surrounded by tall office building, it’s distinctive frontage stands out.

Previous Vienna, a world heritage city, History, Architecture and Culture
Next Driving in the Snow