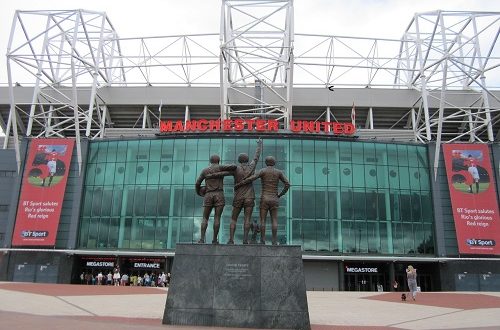 Manchester vies with Birmingham for the unofficial title of England’s Second City. Measured by city population alone, Birmingham wins the title. But Manchester, being at the centre of the most populous region outside of London and the second largest hub for transport (air and rail), Manchester certainly has a strong claim. As a tourist city, it’s third in the UK (second in England) trailing London and Edinburgh.  Due to the fame of it’s leading Football teams, it’s known worldwide.

Although the city dates back to Roman times, The Manchester we know today, is very much the result of the Industrial Revolution and the Victorian era. Many of the fine buildings date from this period when it grew rapidly.

The city in inextricably linked with textiles, such was it’s dominance of the world’s cotton industry that it earned the alternative name Cottonopolis. During the eighteenth century, cotton overtook wool. Canals were built connecting Manchester with the River Mersey. England’s first canal, The Bridgewater, allowed coal to reach the centre from nearby Worsley. Apart from cotton, engineering companies prospered, the city being an important base for many leading companies.

In 1830, the world’s first inter city railway opened connecting Manchester to Liverpool, designed to carry both freight and passengers. Rapid expansion had it’s downsides, sub-standard housing, dangerous and poor working conditions and low life expectancy. So, it’s not surprising that Manchester gave birth to demands for labour reform. It has strong links to the Co-operative movement, Chartists, Suffragettes and the Labour Party.

Today, Manchester is the undisputed regional capital. It has leading shops, head and regional offices as well as a continuing strong manufacturing base.

There is plenty to see, but here are some of the most popular;

Museum of Science and Industry

This celebrates the city’s importance at the centre of the industrial revolution. It occupies the former Liverpool Road railway station, the oldest in the world. Click on this link to visit the website.

This Victorian building has been extensively transformed. It houses important collections of twentieth century and pre-Raphaelite art. Click on this link to visit the website.

Take a tour of the most famous football stadium after Wembley in the UK. Click on this link to visit the website.

Sadly not routinely open for tours as it still functions for its original purpose. It is still worth a look from outside. Our northern cities have some of the UK’s finest Victorian civic buildings, Manchester Town Hall, is arguably the best.

Sadly only the fine Victorian facade remains, following the opening of the Bridgewater Hall, its role as a concert venue and home to the Halle Orchestra ended. The interior was demolished and rebuilt as a luxury Radisson Hotel. The Free Trade Hall was built to commemorate the repeal of the Corn Laws, a protectionist measure that kept grain prices high, hitting the poor in the community.

The site is even more significant, in 1819, a peaceful demonstration by around 80,000 people calling for parliamentary reform was charged by the cavalry. Known as the Peterloo Massacre, 15 people were killed and over 500 injured. A red plaque records this bleak event.

Situated in the adjoining city, Salford in the redeveloped former docks. The Lowry is an entertainment and gallery centre named after the painter L S Lowry. It houses the largest collection of Lowry’s work depicting industrial scenes during the twentieth century. There are two theatres, exhibition areas and restaurant. Nearby is the northern branch of the Imperial War Museum.

To witness the textile industry first hand, head out to Styal close to the airport. Owned by the National Trust, you can see an operating mill, the giant water wheel, workers facilities and the apprentices house. Click on this link to visit the website.

It is well connected by road, rail and air. There are local railway, trams and buses to get around. It is well served with hotels, restaurants and has an active nightlife. Expect big city atmosphere and facilities. Shoppers are well catered for. Kendals (or Kendal Milne) is the most famous department store, sometimes referred to as the Harrods of the North can be found on Deansgate.