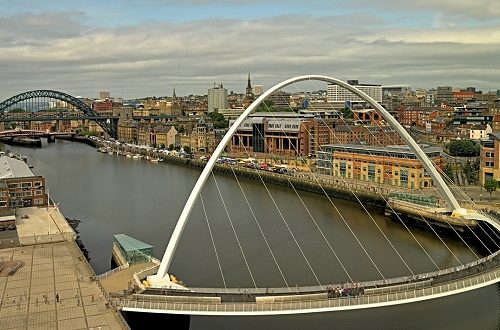 Newcastle upon Tyne is the principal city in North East England. It’s about 280 miles north of London and about 100 miles south of Edinburgh. Despite its modest city population of about 300,000, it has the look and feel of a small capital. The conurbation of which it influences numbers around 1.6 million.

The cities position is attributable to its strategic location, being the first bridging point from the sea on the River Tyne. The Romans named it Pons Aelius and built a fort and bridge. After the Romans left, it was part of the Anglo Saxon kingdom of Northumbria.

Its present name Newcastle is thanks to William the Conqueror who built a new castle in this strategic position. For much of its history, due to its strategic location it was important militarily and evolved as a regional centre of government.

Its growth as an industrial centre is due to coal, from the 16th century the industry prospered. Before canals and railways, coal was transported from Newcastle to London, its main market by sea. By the 19th century, heavy engineering was overtaking coal, giant factories were built along the banks of the Tyne to supply the growing empire.

The city centre benefited from the prosperity generated. Grand streets and public buildings were constructed in the central area known as Grainger Town, many of which are now listed. Grey’s Monument (resembling London’s Nelson’s Column) is in memory of reformist Prime Minister, Earl Grey and overlooks the area.

The city and its surrounding areas was hard hit by the post World War Two decline of heavy industry resulting in large areas of the city being laid waste. The recovery took time but has been remarkable. Today Newcastle is the regional capital, home to two universities and many offices. Industry remains important but has now moved out of the centre. It is one the biggest retail destinations in the country, with Eldon Square and Northumberland Street housing the leading players. The Metrocentre in adjoining Gateshead is the largest shopping mall in Europe.

The Tyne banks have been redeveloped as leisure areas with the iconic bridges linking across to Gateshead. On the Gateshead bank, a former giant grain silo now houses the internationally famous Baltic Centre for Contemporary Art.

Newcastle is a famous for its nightlife, centred around the Quayside and Bigg Market areas. It attracts visitors from across the North of England as well as from Scandinavia using the cities ferry connections. Music venues are around the city, the 11,000 seat Metro Radio arena hosts top band tours.

To escape the crowds, take a walk in Jesmond Dene Park, once the private grounds of industrialist William George Armstrong (later Lord Armstrong).

Getting around is easy, The Metro System in the second largest in the UK after London, it’s the best way to get to the airport from the city centre. Newcastle is a main stopping point on the East Coast mainline from London Kings Cross to Edinburgh. Many other town and cities have direct rail services. Newcastle Airport to the north of the city with a wide range of domestic and international routes.

The buzzing nightlife and wide choice of restaurants cover all diets and budgets. Chain hotels are all present. Consider the airport hotels and use the Metro, it may be cheaper.

Click on this link to visit the tourist office