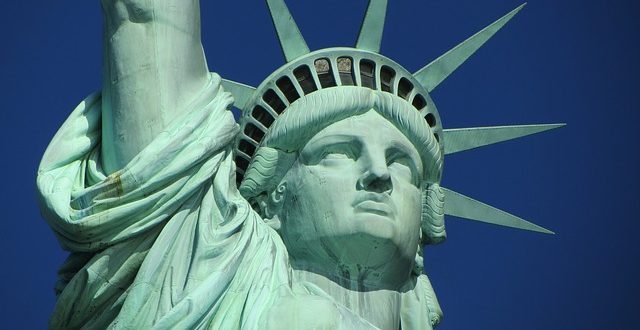 New York, as well as being one of the World’s leading commercial cities, is also a magnet for tourists. Of the five boroughs, Manhattan is where tourists flock to.

It’s not an island, but has water on three sides, the Hudson River to its West and the aptly named East River to the East. It’s surprisingly small, being only about two miles wide and fourteen miles long. Despite it’s size, an awful lot is packed in, achieved by building upwards not sideways! One of the great things about New York, is finding your way around. Roads run East to West, Avenues, North to South. Bear in mind when walking, the Avenues are rather long, and the pavements (sidewalks) are busy. The subway is easy to use, fast and reasonably priced. The exception to the grid layout is Broadway, this runs roughly diagonally from NW to SE.

Roughly speaking, you can say to the South, Lower Manhattan, is the finance district around Wall Street. Times Square the entertainment district is in the middle, Midtown together with many offices including the Empire State Building. The upper parts, East and West are dominated by Central Park with exclusive apartments and hotels to it’s sides. Further North you reach Harlem.

Shops are found pretty well everywhere but 5th Avenue is where the real money is spent.

Found in the heart of Midtown where Broadway crosses Seventh Avenue. Surprising for many, the actual square is quite compact. It’s reputed to be the most visited place on earth consequently its rather busy. Illuminated hoardings and advertisements cover every inch of wall space. Theatres, Hotels and Restaurants are along all the side streets.

The United States grew rapidly through immigration from around the world. In the late nineteenth century it was decided to relocate immigrant handling from the mainland to an island. The centre opened in 1900, handling at it’s peak around one million immigrants per year. Immigrants had to prove they were healthy, financially sound and pass a questionnaire before the could make the final short hop to their new country. The island’s hospital housed those that were sick or diseased, over 3000 never completed the journey and are buried on the island.

Around a third of today’s US population ancestors entered through Ellis Island, it closed in 1954 and is now a popular museum.

The Statue of Liberty welcomes visitors arriving by sea to the United States. Situated on nearby Liberty Island, the statue was a gift by the people of France. It was built by Gustav Eiffel (of tower fame), opening in 1886. It is over 300 feet tall and comprises of an internal frame, bearing the weight, covered in copper sheeting to the design of sculptor Frederic Bartholdi.

A ferry to both islands operates from Battery Park at the southern tip of Manhattan.

As Manhattan grew rapidly in the nineteenth century, the city fathers saw the need for park similar to those in Paris and London. Frederick Law Olmsted won the competition to design the park. It’s landscaping on a grand scale, the park covers about 850 acres, includes several lakes, a large reservoir, over 30 bridges and extensive planting. It’s among the United States most visited attractions. The Dakota apartments where John Lennon lived overlooks the park, Lennon fans flock to his Strawberry Fields memorial area in the park.

Try to imagine if London’s commuter trains rather than serving 11 separate termini all arrived at a single station right in the centre of the city. That’s what you have in New York. Grand Central Station has 44 platforms on two levels with over 60 tracks. The building is a cathedral of the railway age. There are few interesting facts;

The Chrysler Building is among the world’s most iconic buildings. It is a stunning example of Art Deco architecture, many consider it to be New York’s finest building. It has 77 floors and for a short time after opening in 1930, it was the tallest building in the world. Most surprisingly, it’s covering is brick, nearly four million of them. It’s the ornate crown at the building’s top that sets it apart.

The Empire State Building lacks the architectural merit of it neighbour, but stands out for being the world’s tallest building for over forty years. The first building to have over 100 floors, it’s over 1200 feet tall. The observation deck is on the 86th floor gives a bird’s eye view of the city.

Not the tallest, but famous for other reasons, is the Trump Tower on Fifth Avenue. It’s the headquarters of the Trump organisation and where the president has a penthouse apartment. The building controversially led to the loss of the much loved Art Deco Bonwit Teller building, despite assurances made about their preservation, architectural detailing was destroyed.

There are museums covering just about every interest imaginable.

The Met (Metropolitan Museum of Art) near Central Park as well as housing art from all eras also has fashion and armouries. Architect Frank Lloyd Wright’s Gugenheim is on Fifth Avenue, the funnel shape building being a work of art itself.

The Brooklyn or East River Bridge, links Manhattan to Brooklyn. It is one of the cities most recognisable sights. When opened in 1883, it was the longest suspension bridge, the longest span being around 1600 feet. For it’s age, it’s scale is amazing, today it handles 6 lanes of traffic and cycle and footpaths. Trains operated across it in the early twentieth century.

From street food to top world restaurants, there is somewhere for pretty well all tastes and budgets. Fast food, predominately burger and pizza outlets are pretty well everywhere you go and offer reasonable prices. Tipping is pretty well compulsory.

There is a wide choice of hotels from budget to the “sky’s the limit.” Times Square is the most popular tourist base. Do your homework, some areas and establishments near the square are shabby.