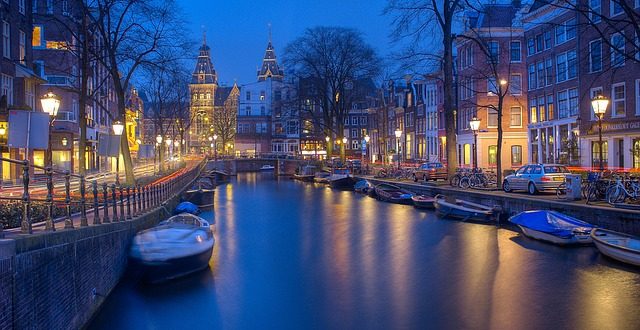 Amsterdam is the capital of Holland (although the parliament though sits in The Hague). The city is home to leading companies including; Heineken, ING, Akzo Nobel and Philips. many international companies have European headquarters there. Whilst the city population is modest, the metropolitan area’s population approaches 2.5 million.

Amsterdam’s canal system give it character. Dating from the 17th century, there are four arcs of canal around the city, with interlinks and other canals, wherever you are in the city, water is close by. When they were built Holland was a world power, Amsterdam became a rich city, it’s wealth was spent on this and other infrastructure. Canals opened up new areas for residential use, many in the distinctive Dutch gable style remain. Today, the canals are a key tourist attraction, free to enjoy unless you take a boat trip.

The Rijksmuseum is the national museum with the most visitors, it has art and history collections. The Stedelijk Museum has exhibitions covering art and design. Van Gogh and Rembrandt are former residents. Anne Frank’s former house is open. Other museums cover the cities maritime history, science and local history.

Being a cosmopolitan city, there ‘s a wide choice of food to suit all palates and budgets. Traditional bars (brown bars) are less commercial equivalents of our pubs. When the weather is good, terraces open. It’s a buzzy city with plenty to keep you entertained. Being a leading commercial centre, there is a wide choice of hotels. Weekends when the businessmen are away is when you’ll find the best prices. Prices drop if you are willing to travel a little from the centre.

Until Eurostar services start, flying is the best option. Schiphol easily reached by train has services from most larger UK airports with a good rail connection to the centre.