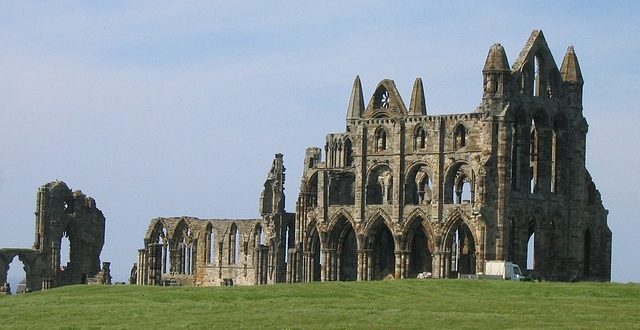 Whitby is on the coastline of North Yorkshire, it’s an attractive bustling resort. The River Esk divides the town with, the two sides linked by a historic swing bridge. There is a wide choice of shops, cafes and restaurants. It’s an ancient town that grew to it’s natural harbour which still functions today. Fortunately it escaped unsympathetic redevelopment. It’s easily reached by road, or for something different, by steam train on the North York Moors railway.

The main shops are on the west side, where there is a further climb to the Georgian West Cliff area. This is where you will find parking, hotels and an un-commercialised promenade overlooking the beach. The whalebone arch remembers the town’s links with a former, not now revered industry. A statue celebrates the town’s most famous former resident, Captain Cook looking across to the abbey.

For lovers of the best fish and chips, the Magpie Cafe overlooking the harbour on the west side is the place to go, prepare for queues. There are plenty of other places to enjoy our national favourite too.

The east side is where older buildings can be found, it’s more picturesque with narrow lanes and old fisherman’s cottages. The most famous building this side of town is the Abbey. Spectacularly located on the cliff overlooking the town and sea, it dominates the town and well worth climbing the two hundred or so steps to get there. It also has an important literary connection being the inspiration for Bram Stoker’s Dracula. Followers of the Goth subculture seem too like the town.

The North York Moors Railway already mentioned is one of the countries longest, crossing the National Park to the attractive market town of Pickering. Whether you get there by train or not, the moors are always worth a visit.

Robins Hood Bay is a pretty village further down the coast. If you are feeling energetic, following the coat path from Whitby is the best way to get there, you can catch a bus back.