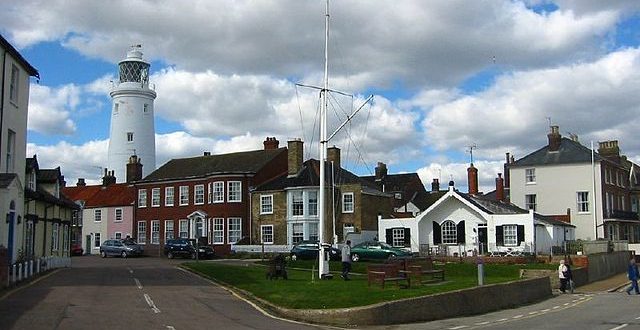 Southwold can be found on the East Coast of Suffolk about 11 miles South of Lowestoft. Lowestoft incidentally is the most Easterly point of the British Isles. Being only about 100 miles from London, Southwold is an ideal place to escape from the metropolis. Whilst this is a benefit for visitors, for the locals there is a downside; many of the town’s charming cottages have been bought as weekend retreats. The town has sandy beaches, a pier and a wealth of beach huts.

Bypassed by the railway

Unlike other East coast resorts of Clacton, Great Yarmouth and Lowestoft, Southwold never had a main line railway. Without such a link to support mass tourism in the early twentieth century, it did not develop like others. Being off the railway map is cited as the reason it has retained its charm with an attractive collection of architectural styles.

For completeness, I should mention, it did once have a railway, it was though only narrow gauge requiring early tourists intent on reaching the town having to change trains at Halesworth. Clearly as it closed as long ago as 1929, it wasn’t too popular.

For anyone knowledgeable about beer, Southwold means one thing, the home of Adnams brewery. The Sole Bay brewery in the heart of the town has been brewing since the nineteenth century and their beers have won many awards. In 2010 they started distilling adding gin, whisky and vodka to its product range. There are many Adnam’s pubs, hotels and shops in the town together but there is a good selection of independent shops as well. Needless to say, brewery and distillery visits are very popular so book in advance to avoid disappointment.

The town is very popular with young families taking advantage of the sandy beaches, as well as with couples looking for an attractive quieter in order to relax.
Explore Southwold

Previous Brexit – will holidays cost more in the future?
Next Italian Lakes