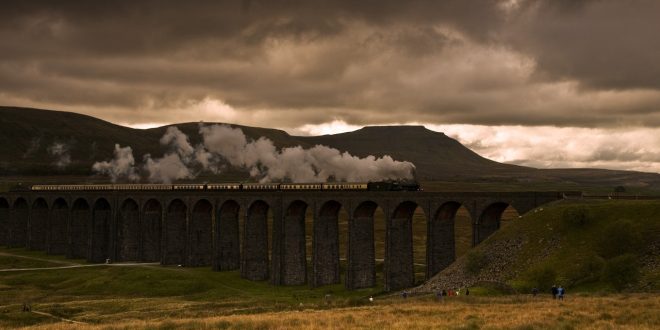 Back in the 1870’s, the mighty Midland Railway company decided they needed their own route to Scotland. The two obvious routes were taken by what we know as the West and East Coast mainlines. The Midland’s only choice was a line through the middle, right across the beautiful but hostile for railway building, Yorkshire Dales.

Before starting constructing, the company got cold feet and tried to a deal with a rival instead, but it was too late, the government insisted on construction.

The Settle Carlisle Railway runs for 72 miles across some of England’s wildest scenery. The route’s highlight is Ribblehead Viaduct, 100 feet high and a quarter of a mile long. It’s now an iconic view of the National Park. Altogether there are about 20 viaducts and 14 tunnels. Around 6,000 workers took about 7 years to build the line, living in shanty towns along the route. Having been forced to go ahead, the Midland didn’t cut corners, the line was built to the highest standards capable of high speeds with heavy trains. Without doubt, it is the most spectacular railway journey you can take in England.

In truth, for much of its life, the Settle Carlisle Railway was a useful not essential part of our railway network. Not surprising then, there’s been several closure threats.

In the 1960’s it avoided Dr Beeching, the railway axeman’s axe as it was needed for diversion purposes during the upgrade of the West Coast line. Although kept open, services were downgraded and maintenance cut to the bone. Once great through trains like the Thames Clyde Express from London to Glasgow were no more.

In the 1980’s with only a few trains a day, the situation was bleak. There was some light, DalesRail ran trains at weekends stopping at closed stations for the benefit of ramblers, their popularity demonstrated the tourist potential.

Structural decay was put forward as justification for closure, and the closure process begun. Politicians, locally and nationally teamed up with supporters, the decay arguments were undermined and public opinion won. Parliament threw out closure plans.

Ironically for British Rail, closure threats brought attention to the line. Thousands of people now knew of the line and wanted to travel on it, passenger numbers, helped by steam specials and excursions soared.

With the West Coast Line virtually at capacity, the line is now enjoying healthy use, carrying freight and passengers. It is one of the most popular steam excursion routes. Stations have re-opened and services improved, sadly there is still no direct Leeds to Glasgow service.

Tragedy struck following the wet winter of 2015/16, the resulting landslip led to the complete closure of a stretch near Armathwaite. A few decades ago this would have led to permanent closure, not now, National Rail have invested millions repairing and restoring the line. To celebrate, no lesser than Flying Scotsman, the world’s most famous locomotive pulled services at the re-opening.

The future looks bright, the line enjoys wide support from the community, tourists, business and National Rail. It’s now an asset to treasure not a liability to dispose of.

Settle is easy to reach by road or rail. Carlisle is on the main West Coast Route and close to the M6. The line is one of many Yorkshire Dales attractions, the area has a wide choice of places to stay. It’s even possible to stay in luxury rooms at Dent station. Several tour operators include the line in their breaks, some steam hauled. There are numerous locations for photography around Ribblehead. Seeing a fully loaded steam train crossing the viaduct is special!