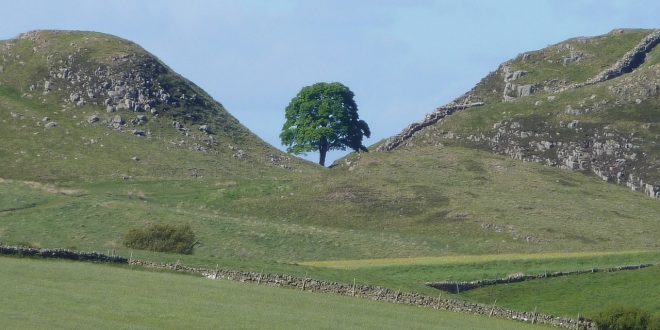 Following our last post on Whitby, we’re continuing with a North-East theme. The Northumberland National Park stretches from the main A69 East-West Road that joins Carlisle to Newcastle up to the Scottish Border. It covers about 400 square miles and is our least visited National Park. This though is not a reflection on it’s beauty, if more people lived close by, visitor numbers would be higher.

Unlike the Lake District, if you are looking for peace and quiet away from the crowds, this is the place to go. It has history, nature, beauty, walks, historic houses and gardens.

Castle ruins cover all parts of the park, you’re never far from one. Hexham Abbey is well worth a visit. Hadrians Wall, though is the star attraction. The Roman Wall was built to protect their empire from marauders. There are many sites to visit with Housesteads Fort being the most popular. Now a remote site, it was once home to nearly a thousand soldiers.

It may not have the high peaks of the Lake District but the Northumberland National Park has much to offer the walker. There are numerous signposted paths including our most famous long distance trek, The Pennine Way. You can see red squirrels, rare birds and unusual upland plants. It has the lowest light pollution in England making it the best place to watch the night sky.

Cragside near Rothbury, now owned by the National Trust was built as a country hideaway by one of our greatest nineteenth century industrialists, Lord Armstrong. For a weekend retreat it’s rather impressive. Armstrong’s workers lopped off the top of the hill and built an impressive stately home. Beyond the house, they built miles of roadway, dug lakes and planted around six million trees and shrubs. Described at the time as the home of the modern magician, the house has more to see than most of it’s age. It was the first in the world lit by hydro-electric power. It had a hydraulically powered lifts and a spit roast in the kitchen, as well as a dishwater. In the impressive conservatory, plants stand on rotating platforms to get the best from the sun.

Being less commercial than other national parks and with no large towns, most hotels are small and independent. The choice on offer is improving. There is a wide choice of camping and caravan parks. Cottages can be rented privately or from the National Trust and other organisations.