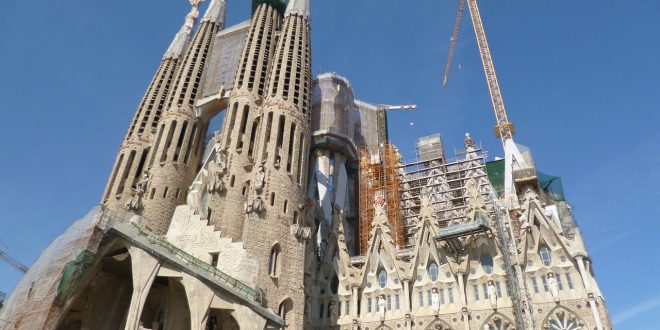 According to Escape Here, Barcelona is the third most visited city in Europe, only London and Paris were ahead in 2015. If you can avoid peak seasons, it will be more enjoyable and cheaper.

Unlike its northern rivals it can boast stunning beaches alongside architecture, culture and history to attract visitors. It is easy to reach from many UK airports and is an ideal location for a short break. Barcelona is capital of the region of Catalonia, a region with its own culture and language. Rivalry with Madrid, the nation’s capital is strongly contested on the football pitch.

Barcelona is synonymous with the architect Antoni Gaudí. He developed a unique style influenced by nature with gothic influences. His masterpiece, the Sagrada Familia, is an enormous church still under construction ninety years after his death. The Pope consecrated it as minor basilica in 2010. As one of the world’s most iconic buildings, it is an absolute must see destination in Barcelona. Other creations of his in the city are Casa Mila, Casa Calvet, Casa Batllo and Park Guell, all masterpieces in their own right! Several of his works have been granted world heritage status.

Although now overshadowed, don’t overlook Barcelona’s 14th century Gothic cathedral. It is in the Gothic district together with many other fine buildings.

The Palau de la Música Catalana and Hospital de Sant Pau, Barcelona are also UNESCO listed, the former is a stunning concert hall whilst the former hospital is now a museum and art gallery.

The Nou Camp Stadium is home to Barcelona Football Club one of the richest clubs in the world so not surprisingly the ground is one of the largest. The museum is a major tourist attraction.

The 1992 Olympics projected Barcelona positively on the world stage, in order to prepare for the event, old industrial areas were cleared and areas were redeveloped.

Since the end of the dictatorship of Franco, use of the Catalan language has recovered and has recreated interest in cultural activity related to it.

The city has several theatres, museums, art galleries and concert halls most set in spectacular surroundings.

Montjuic is the hill adjoining the city, it has a long and mixed history with the remains of a castle, now as well as providing a green lung for the city, it is a place of culture, the Palau Nacional is the National Art Museum of Catalan it is fine building at the top of the hill overlooking grand landscaping of stone steps fountains. The hill is also home to the Olympic Stadium, the Botanical Gardens and several other museums.

The Montjuïc cable car is takes you from the city to the castle and gives great views of the skyline.

With so much to see in the city, it is easy to overlook the beaches. These are important in their own right, several travel writers place Barcelona in the top ten of cities with a beach. Along the three miles of coastline there are seven beaches, it is a popular beach destination for Spanish holidaymakers and for well informed visitors from further afield.

La Rambla is the most famous street in the city. The tree lined thoroughfare runs from the Christopher Columbus statue on the waterfront to the Catalonia Square (Placa de Catalunya) in the city. Now pedestrianised it is the home of many shops, restaurants and bars. To say it gets crowded is an understatement, it takes time to move along. Take care with your belongings.

As a major commercial and tourist destination, all types and levels of accommodation are available. Prices just outside the centre are lower.