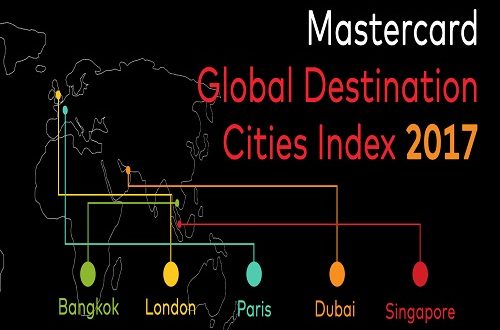 Each year Mastercard published their Global Destination Cities Index. The study now in its ninth year, ranks the most visited cities by the number of overnight stays by international visitors. Here are the results for 2016.

The Top Ten Most Visited Cities

With 19.41 million visitors, Bangkok has been number one since 2012 when it overtook Paris.

London narrowly overtook Paris in 2014, with 19.06 million it is now comfortably ahead of its Gallic neighbour

Despite a further drop, former champion Paris remains in third with 15.45 million

At 14.87 million, it is looking to overtake Paris soon. By money spent, it’s comfortably in the lead

Despite growing to 12.70 million visitors, as mentioned above it has dropped a place

The third city in this close bunch, Seoul saw an increase to 12.39 million

Also in the bunch is Malaysia’s Kuala Lumpur with 11.28 million

Tokyo completes the bunch with 11.15 million

Trailing behind is Istanbul with 9.16 million

Barcelona and Amsterdam both miss out on a top ten place with 8.36 million each

Dublin lies at number ten in Europe with 5.51 million behind Prague with 6.11 million

Miami with 5.86 million puts it just ahead of Los Angeles with 5.68 million in the USA

Previous What’s in our Seas and Oceans?
Next Free Attractions