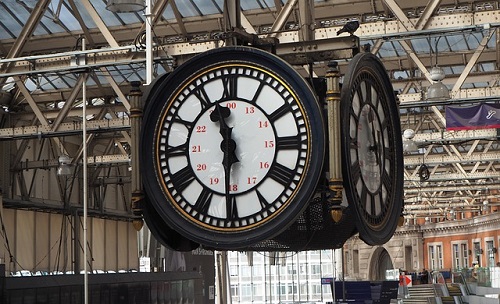 Here is the second article on London’s railway stations. In this part we look at the stations serving destinations south of the city as well as some areas to the east and west.

Anyone familiar with London’s famous Tube map will know that most of the lines and stations are north of the river. South London and the counties beyond are served by an intensive rail system feeding London’s Southern Railway Stations, some of the busiest  in the country. These primarily commuter routes may lack the glamour of the routes to Scotland but without them, our capital couldn’t function.

These routes are also distinguished by their method of traction. The system was widely electrified in the mid twentieth century using a third rail.

Currently undergoing major redevelopment, London Bridge demonstrates the scale of London commuting. Over 50 million passengers use the station every year to reach the city from destinations in Kent and Sussex as well as suburbs in south-east London. When the present upgrade work is complete, services will also serve North London on the Thameslink network.

It’s London’s oldest station dating from 1836. During it’s long life it has been updated, extended, bombed and rebuilt.

Unlike most other major London stations, half the platforms are through services terminating at either Charing Cross or Cannon Street.

Being situated outside the city and south of the river, London Bridge Station was not considered convenient when first built. To address this, the line was extended and the river bridged to reach Cannon Street close to the historical city centre. It’s purely a commuter station serving the same locations as London Bridge. The relatively small station manages to serve over 20 million passengers per year. Until recently it was closed on Sundays and had limited off peak trains.

It has been redeveloped several times, not always sympathetically. Fortunately the ugly office block designed by disgraced architect John Poulson is no more. Offices now fill the space above the platforms.

It is somewhat a twin of Cannon Street, this time extending the tracks of London Bridge to the West End and London’s Theatreland. as with it’s twin, it’s fairly small, intensively used and with a large ornate hotel at the front. The six platforms serve over 30 million passengers a year. Now mainly commuters, in the past it was home to cross channel boat trains.

As at Cannon Street, it’s been widely developed to maximise income from this prime real estate.

In the stations foyer area is a replica Eleanor Cross built at the same time of the station to replace the one in Whitehall destroyed in 1647. Most Londoners believe it’s the point from which mileages to London are measured. In reality, distances are measured from the Cross’s original Whitehall location.

This is the station to put others in the shade. Originally built by the London and South Western, Waterloo serves a vast area south of London to the West Country. It was also the terminus for Eurostar before that moved to St Pancras.

It handles annually nearly 100 million passengers, the nation’s biggest. The previous Eurostar platforms are being developed to add further capacity. Architecturally it may not compare with St Pancras but due to it’s sheer size, light and space it cannot fail to impress. The four faced clock illustrated is one of the most famous meeting points enjoying a dominant location overlooking the vast concourse. Unlike many of our cozy stations, Waterloo is more like one of the vast central station seen on the continent or in the USA.

To reach the city, there is TFL’s Waterloo and City line providing a non stop service to Bank station. Built underground to save cost it opened in 1898.

Until the second world war, it boasted a subsidiary station with an unusual purpose. Necropolis Station had one purpose, to carry coffins and funeral parties to the Brookwood Cemetery in Surrey. The cemetery survives but not the unusual rail service.

Occupying second place in the league of stations lies Victoria. It’s nineteen platforms handle around 80 million passengers serving a broad range of destinations south of the capital including Brighton and Gatwick Airport. It once handled boat trains to the continent.

If you study the architecture in detail, you can see it’s really two adjacent stations. Before coming together as part of the Southern Railway in 1923, it was divided.

Victoria was the London destination for arguably our second most famous names train (after the Flying Scotsman). The Brighton Belle was a Pullman service famous for it’s use by celebrities living in the Sussex resort. There was outcry when the service was ended in 1972. Pullman carriages can still be regularly seen at the station as it is the London base for the Orient Express services.

Although not in Central London, no credible guide to the Capital’s stations should ignore it. Clapham Junction sits on the lines that feed both Waterloo and Victoria our two busiest. As well as being a busy station handling around 30 million passengers, a similar number also change trains there every year. To handle this, it has seventeen platforms, more than most central termini.

It’s never been a pretty station, being basically a lot of platform spread over a vast area. It reputedly serves more destinations than any other including some north of the city. If plans for Crossrail 2 ever progress beyond the drawing board, it could get even busier.

London largely escaped the 1960’s Beeching axe that saw half the nation’s track mileage close. Holborn Viaduct is the only major station serving the south of the capital no longer open. It was built on an extension of the London, Chatham and Dover Railway serving the city. It wasn’t a victim of Beeching, having survived to 1990. Progress not retraction led to its closure. Buried below it, was the Snow Hill Tunnel providing the only north-south mainline railway link across central London. Incredibly this had been disused for many years, when common sense prevailed, this was reopened and now forms the crucial link in Thameslink services, soon to be expanded. As these called for a through station, Holborn Viaduct was replaced by the sub-service City Thameslink station.