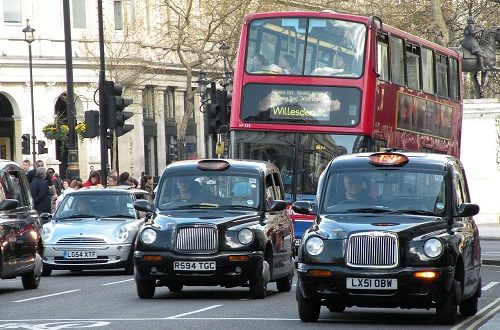 Like the Routemaster Bus featured in another post, the London Taxi is one of the icons of our capital.

Officially called a Hackney Carriage, taxis as we know them date back to the mid seventeenth century when they were first regulated. The Act of Parliament limited the number of licenses, vehicle type (then horse drawn) and operation. The Public Carriage Office license taxis, now under the control of the Mayor of London. Hackney carriages unlike minicabs can be hailed on the street.

Apart from the taxi itself, what also makes London Taxis stand out from those in many cities relates to driver knowledge. To qualify and obtain a licence, taxi drivers must pass a stringent test of their knowledge, hence the name of London’s streets and notable buildings and landmarks. Although arguably not necessary now with Satnav, it is reassuring to know that the driver knows the back streets to get around the many hold ups on the capital’s streets.

The distinctive design of a London Taxi dates from early twentieth century regulations “Conditions of Fitness.” To meet these and later changes, the design evolved. Providing a vehicle meets the conditions, it can be used, though until recently few others did. Now you can see Mercedes Benz, Peugeots and others, most operators though stay loyal to the traditional design. Its modest 25 feet turning circle is very useful on London’s narrow streets.

The forerunner of today’s taxi is the FX4, over 75,000 were made during its 39 year production run. Ownership of the Coventry went through several changes as did the the choice of engine. London Taxis International or LTI took ownership in 1984. Although now a rare site, the FX4 was the taxi responsible for establishing it as an icon.

Replacing an icon is never easy, LTI turned to Kenneth Grange one of the UK’s top industrial designers. His other work includes the High Speed Train, Kodak camera and the Kenwood Mixer. The TX1 first seen in 1997, took on several of the FX4 design cues but was an improvement all round for drivers, passengers and arguably, for the environment, by using a more modern engine.

The design has evolved through the Tx2 to the TX4, with various changes both cosmetic and mechanically

Responsibility for the future now lies with LEVC and their new owner Geely of China.

Although thankfully similar in appearance to it’s predecessors, under the skin it’s all new. The new taxi is made in a new purpose built factory near Coventry. It is a plug in hybrid design meeting the new emission requirements of Transport for London. Battery only range is about 80 miles.

Geely has high hope that this vehicle with its green credentials will be an export success.