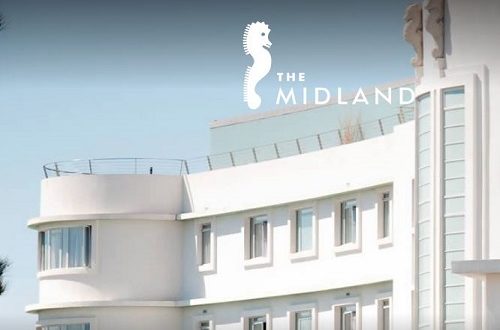 As well as running trains, the former railway companies were the biggest hotel owners. In major towns and cities, close to the railway station you would find the station hotel, mostly bearing though, grand hotel names.

Morecambe on the Lancashire coast grew as a popular holiday resort after the railway arrived in the 1850s. It remained popular until the 1960’s than suffering like many resorts from foreign holiday competition. Such was its popularity with people from the West Riding of Yorkshire, it earned the nickname Bradford on Sea. Unlike its southern neighbour Blackpool, it attracted more genteel and older visitors.

The new Midland Grand Hotel opened in 1933, it was unashamedly upmarket. The architect Oliver Hill and sculptor Eric Gill (of typeface and Broadcasting House fame) set about creating the first and arguably finest Art Deco hotel in the UK. The convex shape follows the town’s bay’s profile, Gill’s sea lions provide external decoration and his work also features above the grand staircase.

On opening, it was the place to stay and be seen attracting the glitterarty of the day. The guest list includes Coco Chanel, Sir Laurence Olivier and Noel Coward. Unfortunately the golden era was cut short with the onset of  World War Two. During the war, the building served as a military hospital.

Post war austerity and the decline of Morecambe as a resort took their toll. After several change of owners, the doors closed in 1998. For many years the grade two listed building was at risk. Fortunately Urban Splash, the regeneration specialists saw the potential. Now fully restored it is part of English Lakes Hotel Ltd.