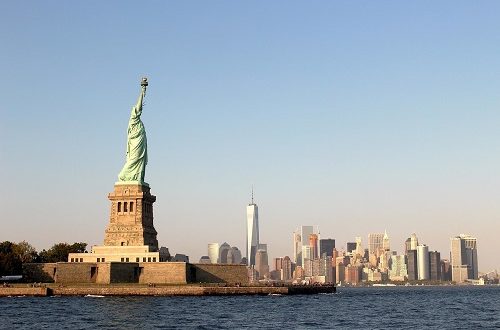 Travel Icons – The Statue of Liberty

London’s Tower Bridge, The Sydney Harbour Bridge and The Eiffel Tower are icons immediately associated with the city in which they stand. The Statue of Liberty goes one better, it is both an icon of New York and the gateway to a nation.

Until 1954, for millions of immigrants seeking a new life in the USA, seeing The Statue of Liberty for the first time was confirmation that their long sea journey was over and that they had arrived!

For over sixty years, Ellis Ireland was the main processing point for arriving immigrants. Over twelve million would pass through its doors replacing an earlier station in Manhattan. Only after passing immigration and health checks could the final journey to mainland proceed. Today, the island houses a museum about its key role in American history.

The Statue of Liberty

Opening in 1886, the Statue of Liberty stands on Liberty Island, it was a gift to the USA from France. The statue itself stands about 150 feet high and with its similar height stone plinth, the total height is just over 300 feet. The National Park Service manages the island and statue.

Based on the Roman goddess Libertas, the goddess of freedom, it is the most famous work of French sculptor Frédéric Auguste Bartholdi. It is not solid, far from it. What we see and accounting for the verdigris colour are just thin copper sheets. Bartholdi fabricated these in Paris, this outside skin of copper bears no weight.

Behind this outer skin, is the massive iron framework supporting the load. This is the work of Gustave Eiffel of tower fame. The great engineer, aware of the location and weather conditions, above all the high winds, made allowance for movement. By allowing it to flex, this prevented cracking of the copper skin. It uses a central tower structure with horizontal beams to support the copper outer skin. Services and a lift pass through the tower.

Launches leave Battery Park at the southern tip of Manhattan visiting both islands. The sole operator is Statue Cruises, standard tickets include entry to the museum on Ellis Island. Tickets include an excellent audio guide. Access to the statue “Crown” level is optional and popular consequently pre-booking is advisable. Unfortunately, access to the “Torch” is not possible however there is a webcam showing you what you are missing.