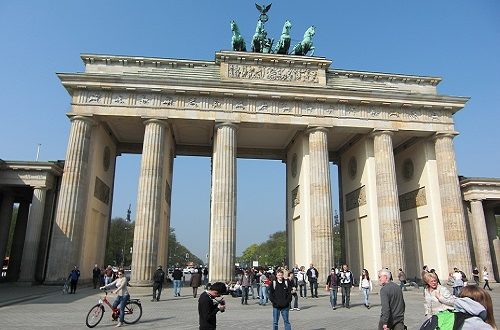 Since Germany’s reunification in 1990, the Brandenburg Gate has again become the symbol of the nation and of its rejuvenated capital, Berlin.

The classical architecture gate dates from the the late eighteenth century. The then king of Prussia, Frederick William II commissioned it to celebrate peace and Berlin’s status as the Prussian capital. It stands on what was originally a main thoroughfare. The six columns on each side border the five thoroughfares, the centre one being reserved originally for royalty.

Since its construction, it has been at the centre of political developments. After defeating the Prussians, Napoleon’s triumphant army passed through it. He took the statue from the top back to Paris as a “Spoil of War.” During the second world war, its image was associated with the Nazi party. It was to suffer heavy damage during the war.

Following the second world war, both Germany and Berlin were divided. Geographically Berlin was in Soviet East Germany but West Berlin was left under West German control. In order to stem the exodus of its citizens to the West through Berlin, the Russians circled West Berlin with the Berlin Wall in 1961. Over time defenses were strengthened. The concrete wall measured twelve feet high and nearly 100 miles long. On the Soviet side, the open track was heavily guarded.

The Brandenburg Gate, sitting on the border, closed.

The Fall of East Germany

In the late 1980s, uprisings across Eastern Europe against communist rule were underway. Once Hungary’s border to the West was open, the end was in sight, East Germans could now reach the West through Hungary. The movement of people frew from a trickle to a flood, East Germany’s leaders had no option, the wall now had no purpose. In November 1989, the troops guarding the wall effectively stood down. Within days much of the wall was torn down.