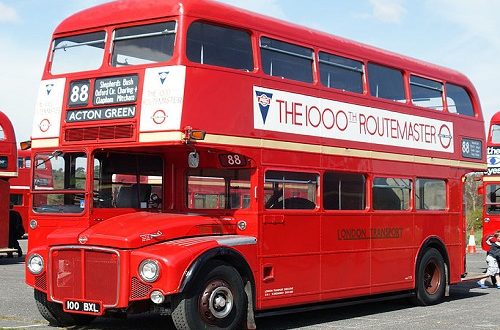 Cities around the world have their recognisable icons, London has several, Red Telephone Boxes, The Tube Map, Black Cabs, Big Ben and this post’s subject, The Routemaster Bus.

Unlike steam locomotives, buses don’t usually pull in crowds, the original Routemaster Bus is the exception. Such is their pulling power, that since their ending of regular service in London, decommissioned vehicles have found new homes around the world. Remarkably, nearly half of the original 2,800 buses built, still exist.

What Makes it Special

Since horse bus days, London’s buses evolved to suit the capitals narrow roads resulting in the double-decker design with the familiar curving rear stairway. Early motor buses kept to the same layout. Many of London’s buses were built in the capital for the capital at various works including AEC (Associated Equipment Company) which until 1962 was owned by London Transport.

Prior to World War Two, plans were in place for a new standard London bus, the RT, the Routemasters or RMs forerunner. RT production ramped up after the end of the war, altogether about 4,600 went to London as RTs and about 2,000 similar Regent and Titan models to other towns and cities.

More RTs than RMs were built, many confuse them, they are both familiar sites. RTs are easy to distinguish from a later RM, by looking at the front radiator grill. The former has a dated vertical format whilst the latter a more modern horizontal design.

Birth of The Routemaster Bus

Although modern looking for the time, under the skin, the RT was dated. By having a separate chassis it was heavy and so thirsty on fuel. It was also labour intensive to service.

In contrast, the Routemaster used a light weight aluminium design without a separate chassis making it more fuel efficient. A purpose built servicing facility was built at Aldenham. It was also to carry more passengers and improve driver and passenger comfort.

The prototype left the works in 1954, by 1956 they were in service, staying in production until 1968. Through the years, they grew longer and a few variants with doors and front entrances were to appear.

The design, for operators has a serious flaw, it isn’t suitable for one man operation (OMO). Even with a front entrance, the driver sits forward making ticket selling and checking impossible. Gradually as OMO working grew, RMs were only viable on the busiest routes where conductors are justifiable and also desirable by allowing for faster loading times.

The New Routemaster or Boris Bus

Post the original Routemaster, various bus designs and makes were tried on London’s roads, none were loved, one in particular was hated, the Bendy Bus. The long single deck bendy bus is a common site throughout Europe. It has good access, low floors, quiet and comfortable. In London, it just didn’t seem to work, on our capitals congested streets they just didn’t seem to fit in. A few caught fire, that didn’t help their image either!

The Double Decker Bus was a symbol of London with a design to suit our city. When electioneering to be Mayor of London, Boris Johnson promised he would scrap the hated bendy buses and introduce a new Routemaster Bus. How much of a factor it was in his success is unknown but he kept to his word. After a design competition, Wrightbus of Belfast won the contract to build the new vehicles.

The bus seats up to 87, has three doors with its spiritual predecessors rear platform although now with doors and curving stairs. It is a hybrid battery/diesel to reduce emission. 1000 buses are in use.

Like the original, it stands out on the road, is unique to London and works well. Whether or not in fifty time it will be an icon is open to debate, personally I think it is a worthy successor!