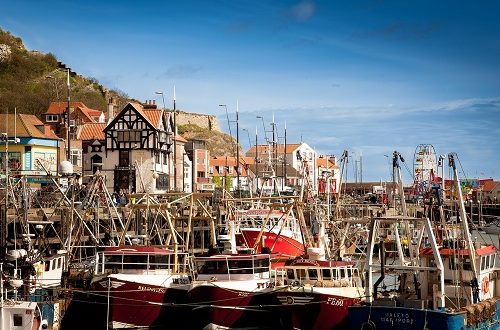 Scarborough on the Yorkshire Coast is after Blackpool, the north’s second largest resort, it is though quite different and well worth a visit.

The promontory which divides the modern town has long had military importance. It’s topped by the castle, now a ruin which dates from the twelfth century. Scarborough Fair, as featured in the song, dates from the thirteenth century, it ran for over 500 years. In its heyday, it lasted several weeks with traders from across Europe. Following the discovery of mineral water in 1626, it Scarborough became a spa, and grew to become the first seaside resort in the country.

The arrival of the railway in 1845, improved access from the industrial West Riding, fuelling the town’s growth. The town’s target market was Victorian Britain’s growing middle class. To accommodate them, several hotels were built, notably The Grand Hotel which still dominates the town’s  skyline. On opening it was the largest purpose built hotel in Europe and is known for its calendar connections:

The modern resort comprises of two contrasting areas, either side of the promontory linked by the promenade, Marine Drive.

This is the quieter part of town. Peasholm Park is an award winning oriental themed park and the setting for many events. During the Summer, for eighty over years, on its lake, there are re-enactments of a second world naval battle, using miniature manned boats. A unique event for a warm summer evening.

The North Bay Miniature Railway runs from the park to Scalby Mills. Original locomotives dating from the lines opening in 1931 are still in use.

The Queen opened the new Open Air Theatre in 2010, it is the largest in Europe. Seating over 6,500, it replaces the original much loved venue that closed in 1986. You can enjoy top artists from across the music spectrum. During the 2018 season, these included: Emeli Sandé, Noel Gallagher’s High Flying Birds, Nile Rodgers & CHIC, Lionel Richie and Texas.

This is quite different, you will find the classic holiday resort souvenir shops, arcades and restaurants. It is the oldest part of the town, with a sandy beach and a small fishing port. Slightly inland is the station and the main shopping areas.

South Cliff Promenade overlooks the South Bay. This area has many large Victorian terrace houses, many were once hotels and guest houses, now many have returned to private use.

Alan Ayckbourn the writer of over seventy plays lives in the town. Most plays premier at the town’s Stephen Joseph Theatre. The Grade Two listed Scarborough Spa complex hosts many events in its Grand Hall.

Built in 1829, The Rotunda Museum is one of the oldest purpose built museums in the country.

It is close to the North York Moors National Park, and the resorts of Whitby, Filey and Bridlington.

Getting There and Accomodation

There are regular rail connections from Leeds, York and Hull. From the south, the A64 trunk road links the town to the A1 near Leeds. From the west, use the A170. It’s a spacious town with plenty of parking available.

There are plenty of hotels, guest houses and B & Bs to choose from. There are also camping and caravan sites close by.

Previous Made by Nature and by Man: the Strangest Bridges of the World
Next Travel Icons – The Routemaster Bus