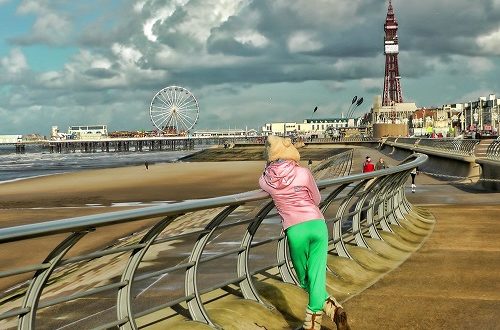 For around fifty years, Blackpool on the Lancashire coast was the definative British holiday resort. Although visitor numbers are well down from the 1950s, the town still welcomes around 17 million per year still ahead of southern rival Brighton. The annual illuminations are a on a scale unique in the UK.

Prior to the railways arrival in 1846, Blackpool was a small coastal settlement, the 1801 census gives a population of just 473. Being within reach of the expanding northern towns, Blackpool was well placed to take advantage. With six miles of golden sand beaches it had natural appeal. Entrepreneurs took advantage of the annual textile town holidays, the so called Wakes Weeks, building accommodation and attractions. Each town took a different week, so Blackpool was kept busy through the season.

To handle the masses the Central Station grew to 14 platforms, more than many London Termini in 1901. Leading companies such as Bass Breweries made annual excursions to the town. Facilities continued to expand through the first half of the twentieth century. Shows would often debut at Blackpool before later moving on to London’s West End.

Whilst now seen as a traditional resort, Blackpool from the start was an innovator, the one to copy.

As mentioned, visitors had a wealth of attractions to keep them amused, quite a change from the arduous long hours spent in their polluted mill towns. It catered for the masses not just the better off. It was exciting, the first town in the world lit by electricity, the promenade was the Las Vegas of its day. The annual illuminations (see below) are today’s legacy of this. It was a pioneer providing water and sewage. The tram network was one of the first in the UK.

From the 1960s, decline set in. The decline of the mills, package holiday competition and rising aspirations took their toll. Visitors were more likely to visit for a day or two, perhaps a weekend than for a full week. This had a dramatic effect on the economy, much of which was geared to the staying public. Small guest houses, bed and breakfasts and basic hotels fell into decline.

More recently, decaying infrastructure, sea pollution and a negative image conspired to put people off visiting the town. Those that did were unlikely to be big spenders. Stag and Hen parties whilst bring in money have alienated other visitors. High unemployment, a lot of seasonal work and low average wages were other negatives led to a declining population and many social problems. By the early 21st century, the outlook for the town was not looking good, fortunately things were to look up.

Since the new millennium, various projects are underway to rebuild and reposition Blackpool as top place to visit, catering for all social classes. Extensive improvements to the promenade, shopping areas and south shore areas have been made. There are investments in improving and updating various venues. The tram network is being modernised whilst retaining the much loved heritage vehicles.

The council is working with private companies to improve and replace much of the ageing building stock. Part of this is the new complex surrounding the North Station. Since the 1960’s and the disastrous closure of the direct line and central station by Dr Beeching, Blackpool has been a railway backwater. This is now hopefully set to change with this work and the electrifying of the line furthermore, the council is proposing re-opening a tram service to the station. 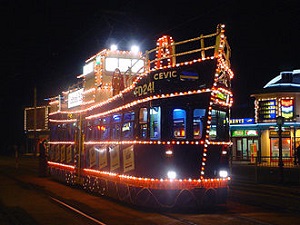 Throughout its challenging years, the annual illuminations have continued to shine. Being the pioneer of municipal street lighting, it’s only right they continue to unashamedly show off their skills.

Every year from the end of August to November, 66 nights in all. Here are some statistics;

Blackpool is worth a visit for the illuminations alone, whilst there though is more worth seeing such as one of the many top shows.