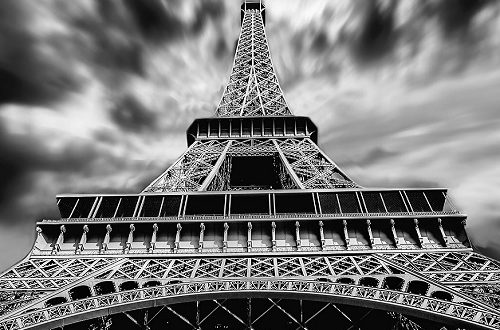 The Eiffel Tower is probably the most recognised travel icon in the world. It symbolises both Paris and France. It seems incredible, but the original plan was for it to be dismantled after twenty years. Gustave Eiffel’s expertise is also demonstrated at New York’s Statue of Liberty.

The Eiffel Tower plan was the winner in a competition to provide the central attraction for the 1889 World’s Fair. Gustave Eiffel ran an engineering company who had built various bridges for the expanding railway system, gaining experience in iron construction. His winning design was built in only three years.

Eiffel’s company funded around three-quarters of the construction cost, in return it would receive the commercial income for the twenty years until the tower’s planned dismantling. In the event of course, the tower lived on.

Today it is admired, but many in Paris’s elite arts society at the time were horrified by the design. Eiffel himself was lampooned in magazines of the day, he gave though a strong defence.

The main structure is about 1000 feet tall, the broadcast aerial adds a further 60 feet. Each side of the square base measures about 400 feet. It elliptical profile adds to its strength. It’s made of wrought iron, a forerunner of steel. It is more malleable and less brittle than cheaper cast iron. Eiffel’s design was criticised at the time for its apparent light construction, warning that it would blow down in the wind. Now engineers recognise it as being highly efficient in its use of iron, quite ahead of its time.

There are three levels, the lower two levels have walkways and restaurants. The third level is 900 feet above ground. Over the years the lifts have been updated. For the energetic, you can reach levels one or two by climbing the stairs. The lifts are unusual in that they need to remain upright as the lift rises through a changing angle of accent.

For many years Eiffel and his family had a small apartment at the top level where there are also various laboratories. It’s use for scientific purposes was an argument used to save it from destruction.

The tower is the most visited paid for tourist attraction in the world. It is open daily throughout the year up to midnight. It’s wise to check the website as on some odd days, there can be closures. You can visit all three floors at various prices. For a special occasion, there is the Jules Verne Michelin starred restaurant on the second floor, it even has its own lift!