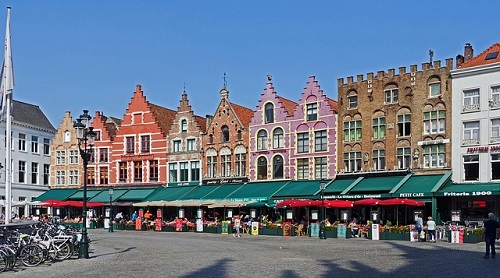 Bruges – Closer to London than Leeds

Bruges, sometimes referred to as The Venice of The North, it is a world heritage site. Only about 180 miles from London, you can reach it in under five hours by car using the Channel Tunnel. It’s well worth the drive. If you prefer to travel by Eurostar, the connection from Brussels takes about one hour.

Although there were Roman settlements in the area, the modern city can be dated to the 11th century. It grew as an important trading centre thanks to direct access to the sea. Being centrally situated  in Europe, merchants from across the continent met to trade a broad range of merchandise from British wool to Italian wines. Gradually it lost importance to Antwerp as the waterways, it’s link to the sea silted up.

It’s renaissance as a modern tourist centre are thanks to it’s location and the amazing survival of so many beautiful ancient buildings. It was fortunate to have escaped 19th century “improvement” and bombing raids in World War II. Tourism though is not new, Charles II lived in exile here before the re-establishment of the UK monarchy.

Today it welcomes around two million visitors a year, a sizeable portion from the UK. As in other Flemish areas, English is widely spoken.

Bruges is a treat just wandering around the squares, narrow streets and canals, visiting some buildings is a bonus. Few cities have views to compare. Here are some sights not to miss:

Wherever you visit in Belgium, it’s a good place for lovers of fine food, beer and chocolate, Bruges is no exception. There are many fine restaurants, leading hotel chains and shops offering tempting cakes. As a tourist honeypot, it is not cheap but worth it. The Belgians are proud of their fries, usually served with mayonnaise, try them if you hungry.