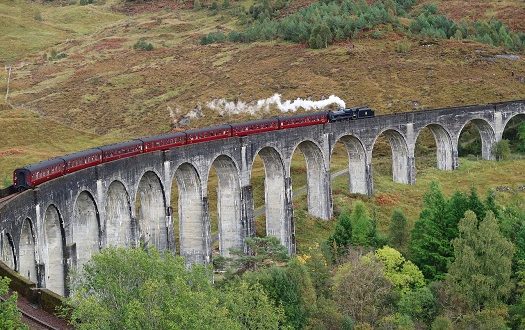 Scotland’s West Highland Line regularly features in the top ten of the world’s greatest rail journeys, putting it on par with the Trans Siberian and others. Rail enthusiasts travel from all over the world to see and ride on it, to find out why it is so special, read on.

The Route to Fort William

The 160 mile journey starts at Glasgow’s Queen Street Station. The West Highland Line is by many, considered to start at Helensburgh Upper station, after it has left the tracks it shares with Glasgow’s commuter traffic. Now the excitement begins, the train passes Gare Loch and Loch Long before reaching the North end of Loch Lomond passing through mountain and forest scenery.

After the remote Crianlarich station, the branch to Oban heads West. Tyndrum must be the smallest village boasting two stations, lower and upper on the Oban and West Highland lines respectively. The Horse Shoe Curve is between Tyndrum Upper and the Bridge of Orchy, the line following the contours almost doubles back on itself, Alpine railway fashion! A viaduct would have been shorter, less spectacular and more expensive to build. After the Bridge of Orchy it passes close to Lochs Tulla and Laidon before it reaches wild Rannoch Moor Station and then to the even remoter station at Corrour, one of a handful with no road access.

The line now descends passing Loch Treig before reaching the largest town on the line, Fort William. Fort William is spectacularly situated at the Southern end of the Great Glen, the geological fault line that crosses the highlands. The town’s 10,000 population is boosted by the busy tourist industry.

Visit Fort William by all means, but don’t be tempted to end your journey there. This is the terminus of the Caledonian Sleeper for London. After reversing trains to Mallaig set off on their 90 minute, 40 mile journey. In Summer you have the option of travelling on the Jacobite Steam service, one of the few scheduled steam services on main lines.

Soon after leaving the town, on the right you will see, the series of locks on the Caledonian Canal that takes advantage of the Great Glen. It follows the banks of Loch Eil with views to Ben Nevis, Scotland’s highest mountain.

The highlight on this part of the line is the Glenfinnan Viaduct, made famous through Harry Potter. Being built on a curve, it can be admired from the train, providing you sit on the left side. Whilst looking like a traditional viaduct, it is actually made from concrete not stone, earning the contractor Robert Mc Alpine the nickname Concrete Bob.

Fishing is still important to Mallaig, it also has ferries to some of the Scottish islands and caters for tourists.

From Glasgow to Mallaig there are only three trains each way, the journey takes about 5¼ hours. Fort William can be reached from London on the Caledonian Sleeper. If you have really got the bug for rail travel, from Mallaig take the ferry to Skye. After a break there, enjoying the island’s sites. Cross the Skye Bridge to Kyle of Lochalsh and enjoy the almost as attractive, rail journey across Scotland to Inverness.

As well as the already mentioned steam Jacobite service, several other excursions use the line.

For more information and tickets, click on this link