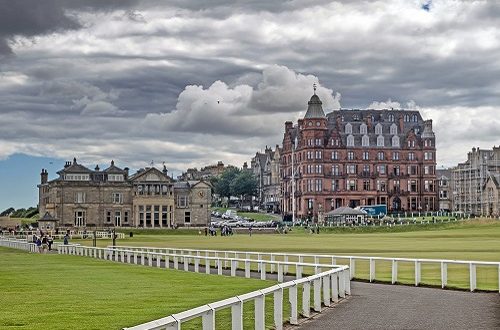 Golfers need no introduction to St Andrews, it is the home of golf, playing at one of the seven courses is a rite of passage. There is though more to the town than golf, St Andrews is well worth a visit even if you don’t play the game.

Located on Scotland’s Fife Coast, it is about 55 miles by road from Edinburgh using the M90 and A91. The city’s population of under 20,000 is swelled by visiting golfers, other tourists and students. The nearest station at Leuchars is on the East Coast mainline with direct services from Edinburgh and London Kings Cross.

As the city’s name suggests, St Andrews roots lie with religion. Until the reformation, it’s cathedral, which was the largest in Scotland, was the centre of power. Today the cathedral is a ruin, but it’s scale and importance is still clear to see.

The town is compact with many historic buildings. West Sands separates the Old Course from the sea. It’s dunes and the beach are popular with locals and students. It’s the setting used in the film, Chariots of Fire.

It’s Scotland’s oldest university and third oldest in the UK after Oxford and Cambridge. It’s often ranks in third position. As with it’s southern seats of learning, many of the buildings are in and around the city centre. There are many traditions as befits an ancient establishment, one is the undergraduates bright red gowns, worn for special events. The weekly pier walk is a good opportunity to spot them.

Not surprisingly, there have been many famous alumni. John Knox founder of the Scottish Presbyterian Church. John Napier, mathematician and discover of Logarithms. The Duke and Duchess of Cambridge.

St Andrews is known worldwide as the home of golf.  The Royal and Ancient Golf Club dates from 1754, it occupies the impressive club house featured in most pictures of the town. The seven courses are managed independently by St Andrews Links and in fact are public.

Most famous of course (no pun) is the Old Course. Golf has been played in this part of the town for around 600 years. The first tee and the eighteenth green reach right in to the edge of the town. When The Open Championship is played there, the area around it is transformed by the many temporary grandstands surrounding them. A ballot system gives the opportunity for anyone with a suitable handicap to play on this historic course.

World Golf (apart from the US) is administered by the R and A, now a separate organisation from the similarly named Golf Club.

For a city of it’s size, St Andrews is well provided with places to stay. Needless to say, when the golf season is in full swing during the Summer, many hotels are full and prices are high. Graduation week is also busy. Out of season, deals are available. Hotels book up early whenever a championship is in town.

Other attractions include the Botanical Garden, the Golf Museum, the University Museum and the aquarium. There are also attractive places to visit such as Anstruther.