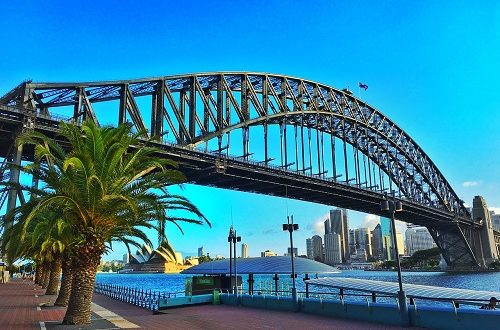 The Sydney Harbour Bridge stands out as one of the most recognisable travel icons in the world. The annual New Year firework display centred on the bridge has been seen again and again by millions worldwide. Like New York’s Statue of Liberty, it occupies a prominent location symbolising both the city and Australia.

Schemes to bridge the harbour date from the early nineteenth century but for one reason or another none were to progress. A cantilever design bridge came close to progressing at the beginning of the twentieth century but failed due to lack of funds.

After World War One, the project was again resurrected. John Bradfield was appointed chief engineer, he and his team set about visiting and evaluating various bridges around the world. The team concluded that a single arch like the Hell Gate bridge in New York rather than the earlier cantilever design was preferable. Dorman Long of Middlesbrough who built the similar design Tyne Bridge won the tender to supply the iconic bridge.

Like a giant meccano set, the components from Dorman Long were fabricated and assembled on site, starting the arch from either shore until they met in the middle. Rivets rather than welding hold it together. Once the arch was in place, it acted as a crane for laying the bridge’s deck. After nine years construction, it opened in 1932.

It links Dawes Point to Milsons Point. The Sydney Harbour Bridge is multi-purpose carrying The Bradfield Highway, eight lanes altogether, a two track railway line as well as foot and cycle paths. The longest span is 1,650 feet, the total length is nearly 3,800 feet, it is 440 feet high. The deck sits about 160 feet above the water.

In the 1990s, the Sydney Harbour Tunnel opened to relieve the bridge’s road traffic.

Climbing the bridge is now a popular with the thrill seeking traveller.